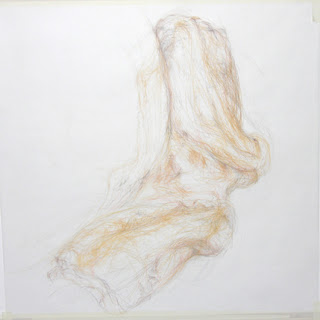 During the summer I have been escaping and volunteering one day a week at an archaeological dig in York. The area is called Hungate and being developed over the next few years. You can find information on http://www.jorvik-viking-centre.co.uk/hungate/abouthungate/about1.htm I have found it fascinating, taking a glimpse at how archaeology works, how to read the soil, about finds, about context and about the people who work and volunteer in a very interesting community.
Last week we found a piece of a mortarium, an roman food processor bowl, like a pestle and mortar, and it was so interesting that I had a strong urge to draw it, follow the curves of the spout and rim we found, the colours and markings of age, but the incredible strenght and its cool pottery feel that survived 2 millenia. It is broken, so it was rubbish to the romans because unusable and found in an infill trench, but it is a treasure to me. So this is the first draft after the first day drawing and it feels absolutely wonderful to be drawing again. Slept the best in ages.

You mean two millenia! It's beautiful, the drawing I mean. Thought first I was looking at a drawing of a strangely shaped discoloured old bone. With your drawing there is always a sense that what you draw is alive to you, and you don’t try to pin it down but approach whatever it is with openness and curiosity, take tentative steps towards it, create an active relationship with it. And how lovely that drawing and the joy it brought made you sleep well too. Makes me aware how art is a living breathing process, with healing properties.